When you Don't Know Which Witch is a B*tch 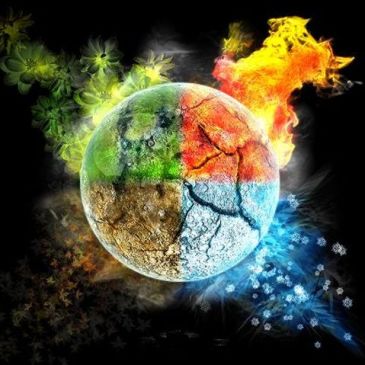 Elements, something that we all work with in one form or another, small or large. Even though it is something that all witches and familiars can recite off of the top of their head, we will be covering more than just the western version of the elements. So grab a cup of brew and let’s jump into this.

2.  Air – This element may be considered flighty but it is the element of intelligence and communication. Air rules over Spring, the east and the dawn, the time of new things. Air is used in rituals for traveling, instruction, study, freedom, knowledge and recovering lost items.

3. Fire – Is an element that both creates and destroys. It is passionate, energetic and sexual. Fire rules over summer, of course, the south and Noon. Protection, courage, sex, energy, strength, authority, and banishing negativity are the rituals that use the element of fire.

4. Water – Water is the element of emotions, healing and cleansing. It is soothing, flowing and loving. Water rules over Autumn, the west and dusk. Witches can use the element of water for purification, love, psychic awareness, dreams, sleep, peace, marriage and friendship.

5. Spirit – Must I really go over spirit?

Now this doesn’t cover all aspects of the elements, sometimes you have to do your own damn research, as there are colors, senses, tools, tarot, animals, places and so on and so forth that align with each element.  There are also several chants that can be used to invoke the elements in your rituals, personally I just use

“Oi! What up. You want to help out? That would be great. No pressure, just don’t want some creepy crawly with me while I do my craft.”

If you like high magick/craft and or alchemy, you can add in three additional elements to the above mentioned five; the sulfur, mercury, and salt.

Now, I will be completely honest, the Chinese alignment is not something I am 100% familiar with. However, if it is something you are interested in, please go research it and dive right into it. Or even if it just peaks your interest a little, still research it. I have to be honest, its not something I believe I have seen often mentioned in most books/websites that are available to us.